The in vitro generation of a large number of functional T cells is important for basic research as well as for therapeutic and clinical approaches dealing with organ transplantation, protective and tumor immunity or the treatment of allergies and autoimmune responses. To achieve this goal, initially the isolated resting T cells need to be stimulated to activate their differentiation and natural immune response capabilities. In a second step, the quantity of the mature cytotoxic, memory and regulatory T cells recognizing a specific antigen is increased by promotion of their proliferation.

In nature, induction of these pathways is strictly controlled by the simultaneous occurrence of two signals. Signal 1 is the major antigen recognition, which means the interaction of the T cell surface receptors with the major histocompatibility complexes (MHCs) of antigen presenting cells (APCs).

While helper T cells carry CD3 and CD4 co-receptors and bind to the MHC class II molecules of dendritic cells, macrophages or B cells, cytotoxic T cells exhibit CD3 and CD8 co-receptors and are therefore able to recognize the MHC class I molecules presented by macrophages or any nucleated cell. Signal 2, also known as co-stimulatory signal, denotes the interaction of the CD28 co-receptors of T cells with the glycoprotein B7 on the APC surface. Only the combination of both signals over a clearly defined period results in interleukin release by the APCs and consequently in downstream signaling in the T-cells, leading to an effective stimulation and proliferation. 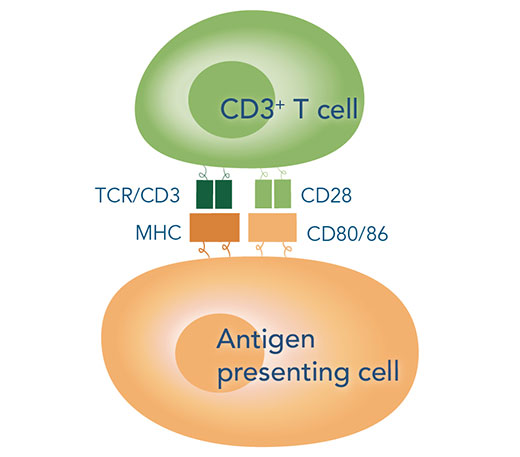 Antigen presenting cells (APCs) activate T cells via two signals: interaction of a MHC molecule that presents a peptide and binds to the TCR/CD3 complex (signal 1) and via CD80 or CD86 that binds to CD28 on the T cell (signal 2).

As T cell stimulation in vitro requires the mimicking of both natural signals, most of the contemporary activating reagents rely on multivalent anti-CD3 and anti-CD28 antibodies. However, the activation still poses the need for a precise modulation of the T cell surface interactions as well as the signal duration and intensities to meet a sufficient signal threshold, otherwise the cells can become anergic or even degraded. This modulation is frequently realized by immobilization of at least one of the antibodies on either plate- or bead-based solid supports. In doing so, a favorable microenvironment for the clustering of TCRs and the corresponding co-receptors can be achieved. Nonetheless, approaches based on culture plates rather result in an inefficient use of space by formation of antibody monolayers. Another inconvenience arises by the fact that prolonged activation can cause down-regulation or even auto-inhibition, leading to suboptimal yields. This is especially a disadvantage in widely used magnetic bead-based approaches, where it is often neither possible to remove the particles completely, nor at a distinct point of time. These circumstances are further complicated by tedious assessment of other modulation factors, such as culture density, medium composition, bead-to-cell ratio and debeading time.

Our CD3/CD28 Streptamer® principle is based on our Strep-tag® technology and offers an alternative T cell activation and expansion approach. In this method, anti-CD3 and anti-CD28 Fab fragments fused to a Twin-Strep-tag® (Fab-Streps) are immobilized on Strep-Tactin® multimer backbones to generate soluble polymeric protein complexes (CD3/CD28 Streptamers). Consequently, the regular drawbacks of solid supports are overcome, and a defined and consistent activation signal is induced. In addition, the 3D structure provides an increased surface area for interactions. Moreover, simply adding excessive innocuous biotin leads to quick dissociation of the stimulatory reagents from the activated cells, which does not only result in an instantaneous signal termination, but also delivers viable and unmanipulated targets. It is flexibly usable from small scale experiments to high-throughput screens and further provides an unparalleled level of modulation options and reproducibility as well as intensity- and time-resolution. 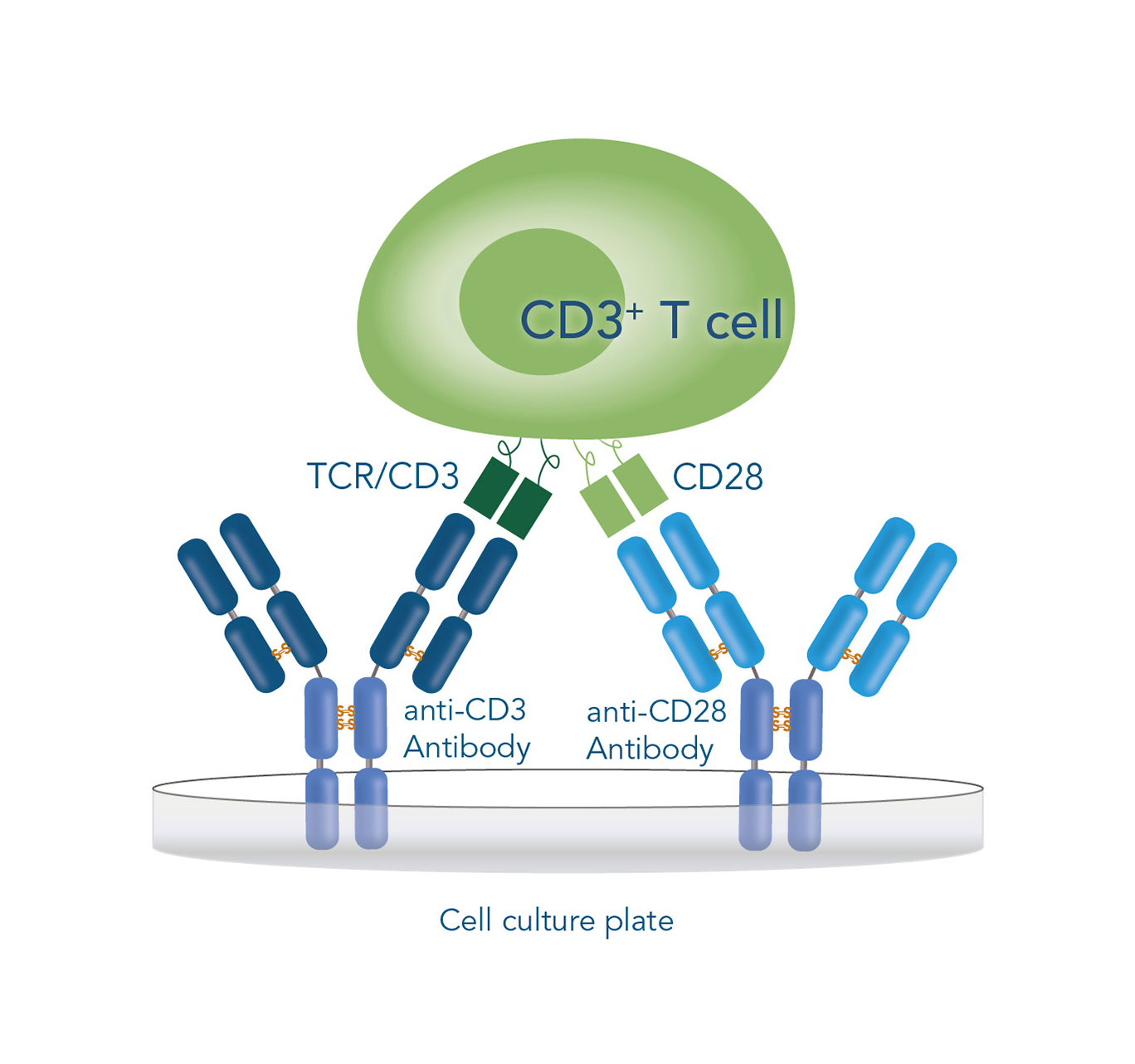 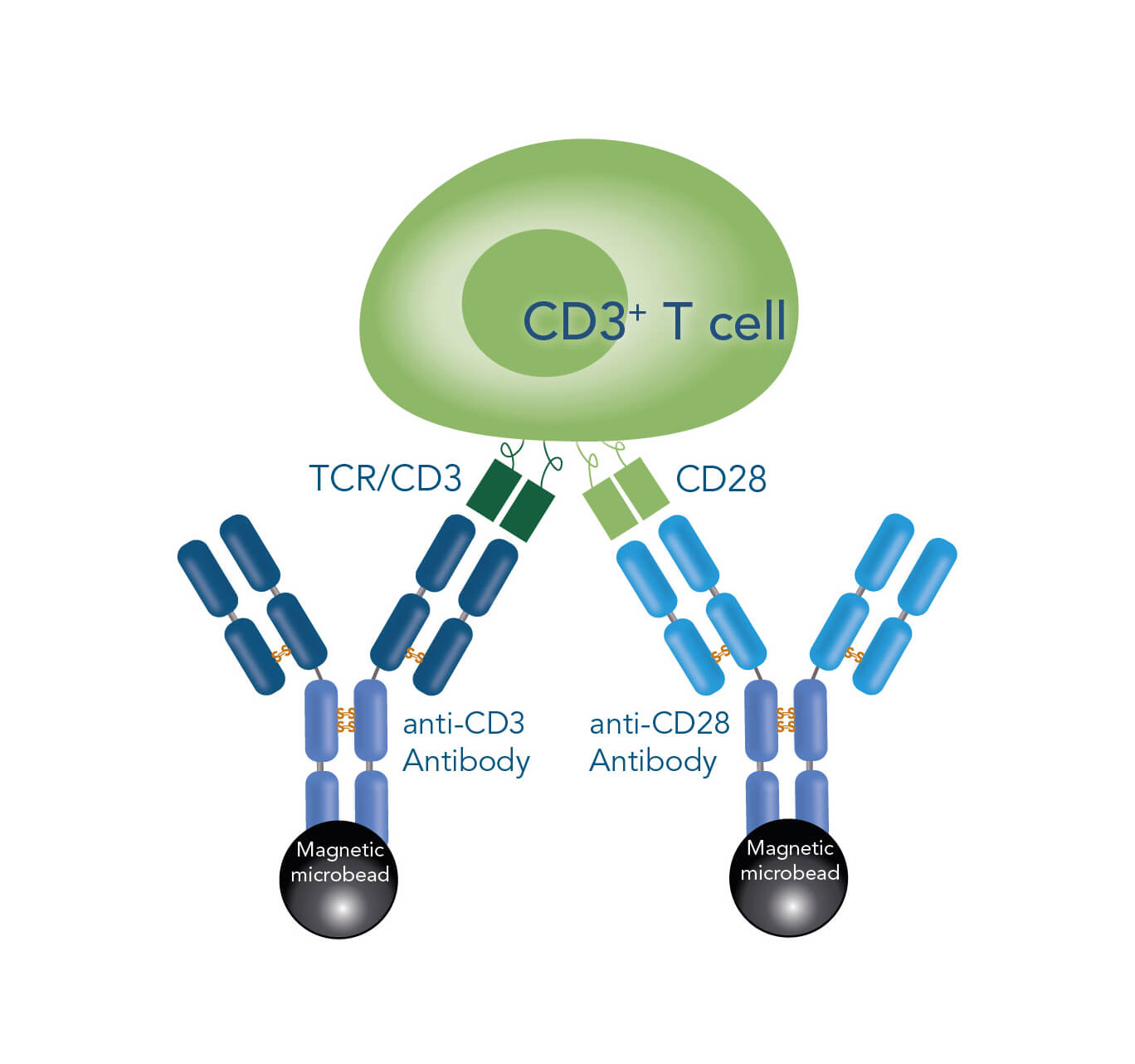 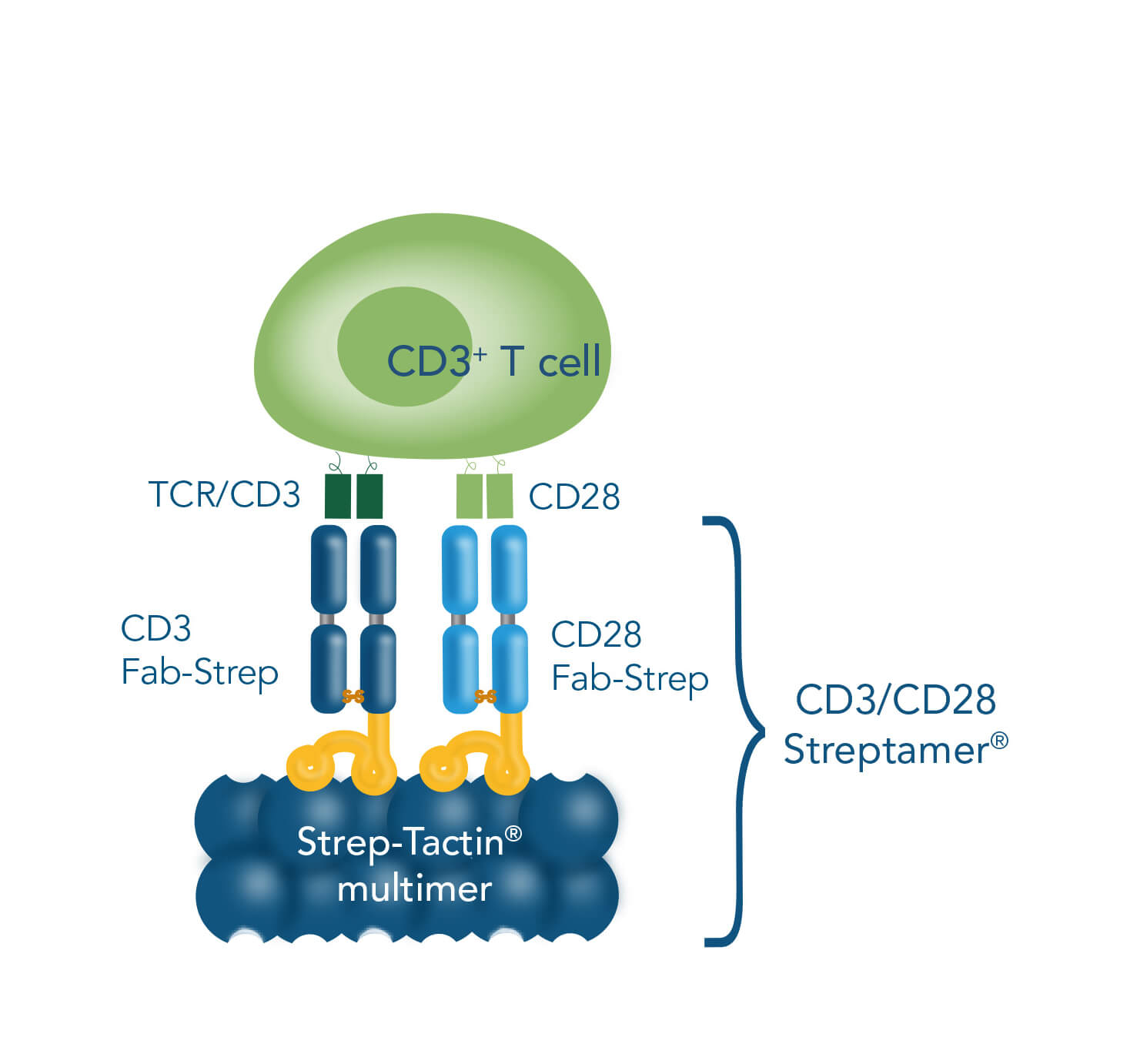 T cells can be activated and expanded for example by coating antibodies against CD3 and CD28 directly on the cell culture plate, by beads that are coated with anti-CD3 and anti-CD28 antibodies or by soluble CD3/CD28 Streptamer® complexes that stimulate CD3 and CD28 via Fab fragments.

To stimulate only a strictly defined group of T cells, e.g. viral or tumor-associated peptides are implemented. These are processed by APCs to produce corresponding surface MHCs presenting the antigen which are then utilized to trigger T cell activation.