StarGate has been developed for the rapid systematic screen of the optimal expression (regarding expression host and/or promoter) and purification (regarding the fusion tag) system for a given gene of interest (GOI).

There are two possible cloning procedures. 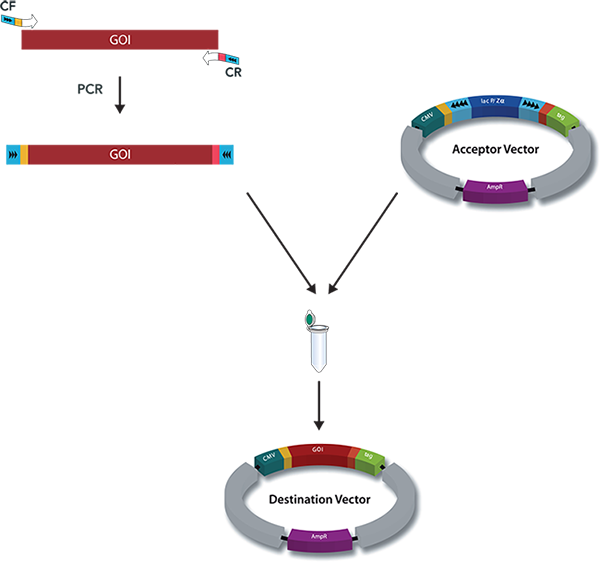 The Direct Transfer Cloning procedure is recommended in cases the optimal expression and purification system is already known. In this procedure, a PCR product containing the gene of interest can be directly inserted into the appropriate Expression vector (Acceptor Vector).

In the first step, the gene of interest (GOI) will be equipped at both termini with combinatorial sites (orange and red) and the Esp3I recognition sites (light blue), which are important for oriented insertion of the PCR fragment. This PCR product is in the second step integrated into the appropriate Expression vector resulting in the final expression construct, the so called Destination Vector. The formation of the correct Destination Vector is monitored via blue-white screening on LB-Agar plates containing X-Gal. used for transformation or transfection of the expression host.

StarGate cloning via the pENTRY-IBA vector provides a tool for the systematic and rapid screen of the best working expression conditions for a certain GOI, where nothing is known from literature. After initial pENTRY cloning, the GOI in the resulting Donor Vector can be easily transferred by a simple one-tube reaction into a multitude of Acceptor Vectors providing different features. 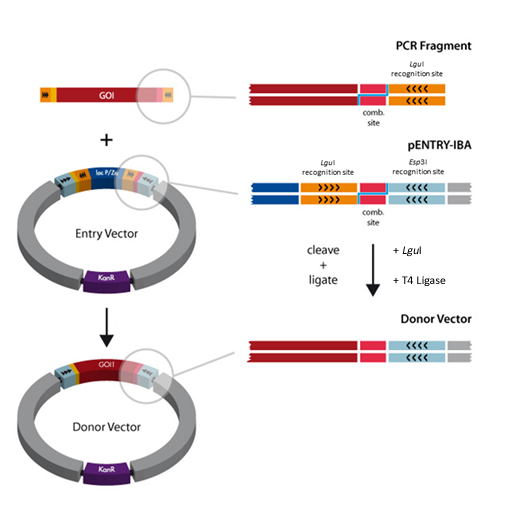 In the first step, the gene of interest (GOI) will be equipped at both termini with combinatorial sites and the LguI recognition sites, which are important for oriented insertion of the PCR fragment into pENTRY-IBA51. This is done by PCR using a proofreading polymerase.

Recombination of the PCR product with the Entry Vector at the combinatorial sites (red and orange) leads to generation of the Donor Vector. This step involves loss of the LguI restriction sites (dark orange with arrowheads), making the recombination reaction unidirectional and thereby highly efficient. 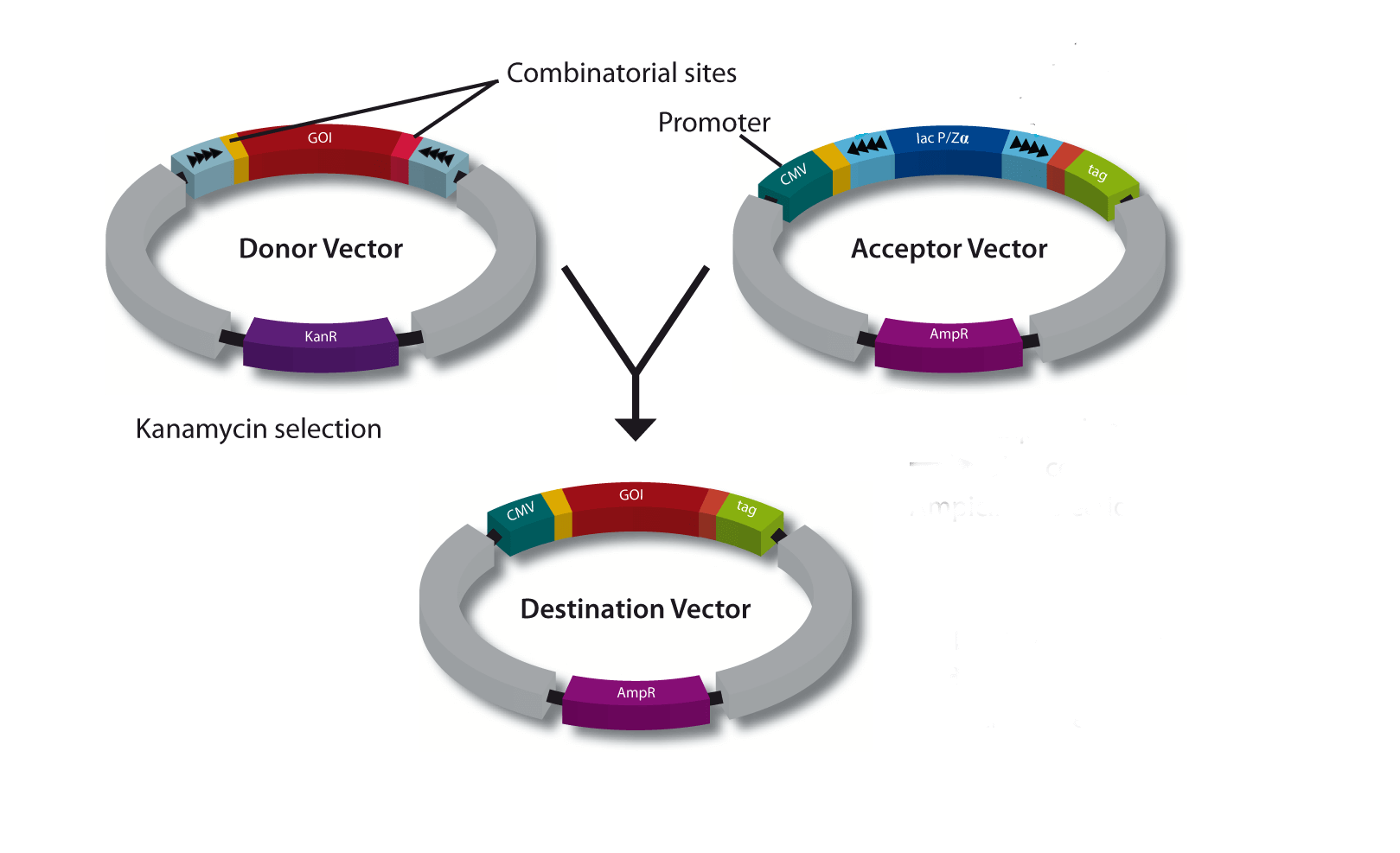 In the transfer reaction step, the GOI is transferred from the Donor Vector into an Expression vector (Acceptor Vector). The Acceptor Vectors provide the desired genetic surroundings (i.e. affinity tag, promoter (prom), additional signal sequences, etc.). In cases the optimal expression and purification conditions of the GOI are unknown, a variety of different Acceptor Vectors should be chosen.

The transfer from the Donor Vector into the Acceptor Vector is assisted by Esp3I as restriction enzyme and T4 DNA Ligase. In the resulting Destination Vector, the GOI is placed under control of the selected promoter (prom), allowing GOI expression in the selected expression host. In this example, an affinity tag (green) is fused to the C-terminal end of the GOI expression product.

In the past decade, prices for gene synthesis services have become more and more favorable. Therefore, gene synthesis, offered by a wide range of scientific service providers, is a fast and easy alternative to create a StarGate Donor Vector containing your GOI (gene of interest). Compared to standard cloning procedures (via PCR, restriction enzyme digestion, purification steps, ligation), gene synthesis is a comfortable way to generate a StarGate Donor Vector, offering the opportunity to optimize the codon usage of your GOI to gain improved protein expression in your particular host. 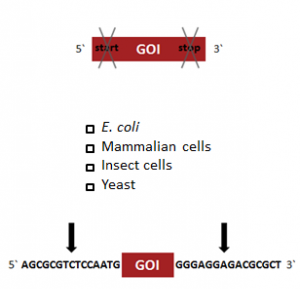 How to generate a StarGate Donor Vector by using a gene synthesis service: 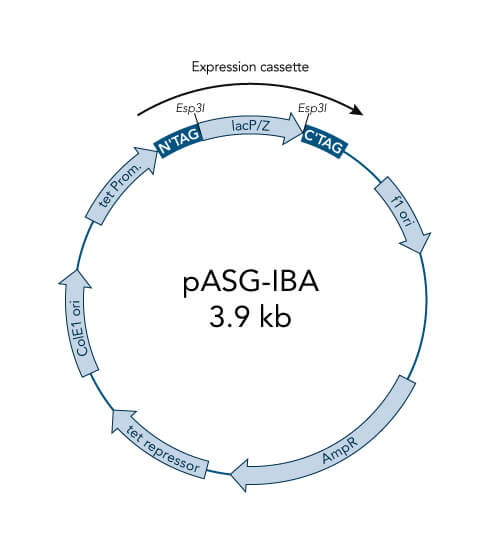 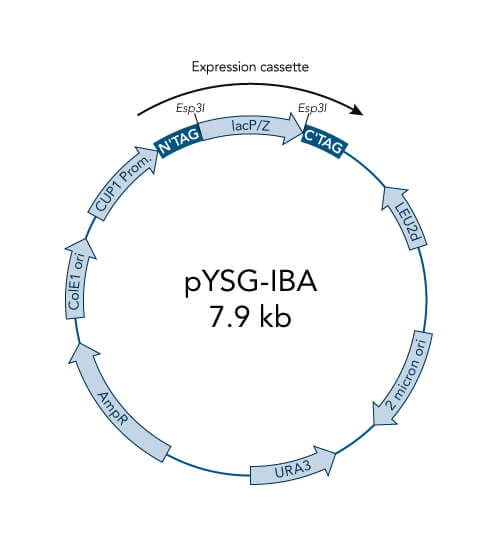 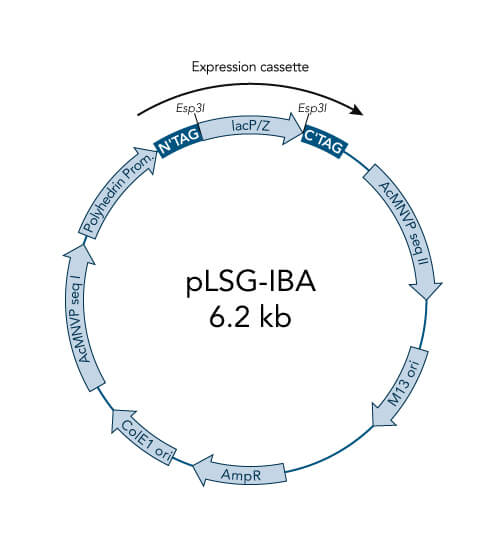 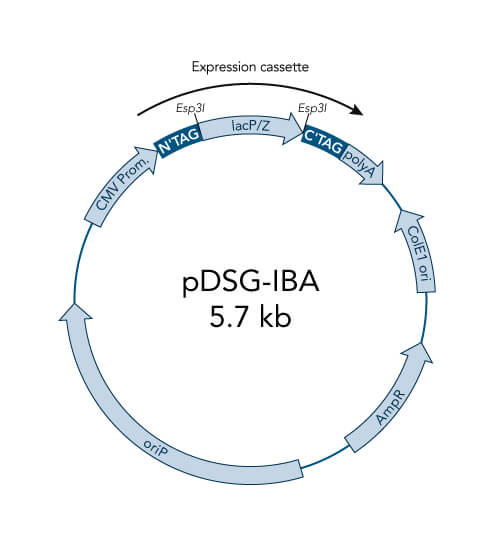 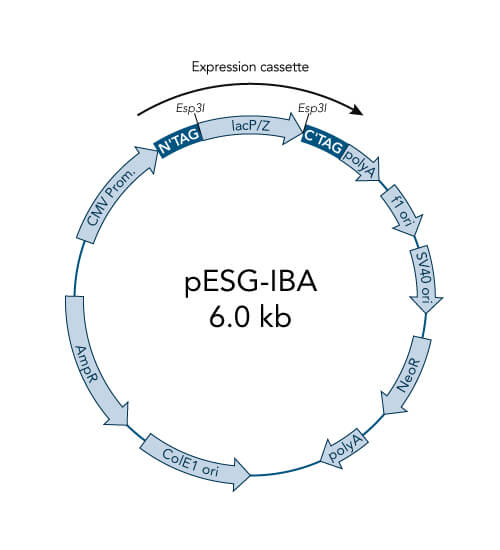 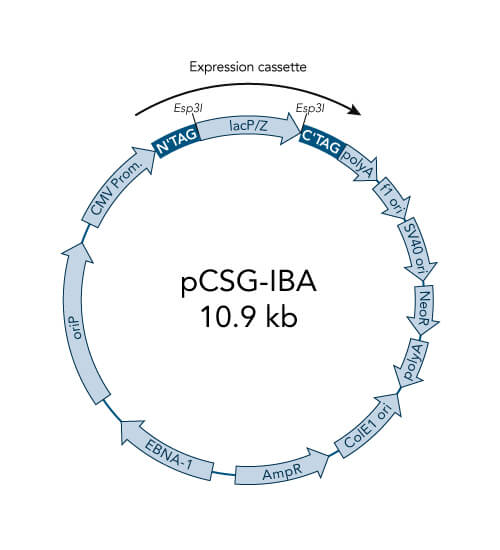 Some vectors provide a N-terminal fusion of the ompA signal peptide which mediates the secretion of the recombinant protein to the periplasmic space of E. coli. There, the signal peptide is selectively cleaved by the E. coli signal peptidase. The secretion strategy is essential for the functional production of proteins containing structural disulfide bonds that are often present in naturally secreted proteins. The reducing conditions in the cytoplasm of E. coli prevent disulfide bond formation which can lead to aggregation or degradation of unfolded polypeptides.
Furthermore, periplasmic secretion separates the recombinant protein from cytosolic proteases. Since the E. coli outer membrane can be selectively degraded by mild treatment (EDTA, lysozyme etc.) the spheroplasts containing the cytosolic components can be easily removed by centrifugation.
In addition, the periplasmic space is accessible to molecules < 600 Da allowing to influence folding or stability of the recombinant protein during expression by adding active substances to the culture media (e.g. redox components, non-metabolizable sugars, ligands of the recombinant protein etc.).
As long as a cytoplasmic recombinant protein does not include stop-transfer sequences, the advantages of periplasmic secretion are also amenable to this type of protein. However, because stop-transfer sequences are difficult to predict, it is advisable to try both strategies in parallel. Using the vectors for N-terminal Strep-tag® II or 6xHistidine-tag fusion, the change from cytoplasmic to periplasmic expression (and vice versa) can be achieved by a simple cloning step via the NheI/BstBI and the EcoRV/HindIII restriction sites on the 5'- and 3'- end, respectively. 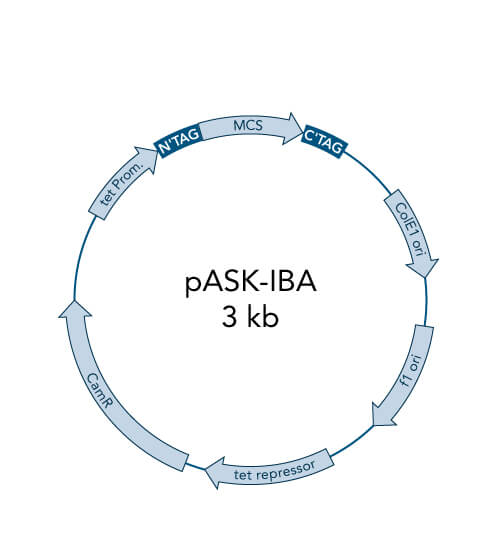 Features and benefits of the pASK-IBA vectors:

The pASK-IBA vectors are available with Strep-tag®II or 6xHis-tag, the OmpA secretion signal, special protease cleavage sites or Chloramphenicol resistance.

pASK-IBA vectors work with the tightly regulated tetracycline (tet) promoter. Expression of the foreign gene is stringently repressed until induction with a low concentration of the chemical anhydrotetracycline. In contrast to the lac promoter, the tetA promoter/operator is tightly controlled and not functionally coupled to any cellular regulation mechanisms or genetic background. Unlike with the T7 promoter, special E. coli strains or extra plasmids are not required. The vectors do not mediate resistance against tetracycline.

The tet repressor is encoded on the pASK-IBA plasmids and is constitutively expressed from the b-lactamase or the chloramphenicol acetyl transferase promoter, respectively. This special arrangement guarantees a balanced stochiometry between repressor molecules and plasmid copy number. Expression of the foreign gene is stringently repressed until efficient chemical induction with a low concentration of anhydrotetracycline. In contrast to the lac promoter - which is leaky, susceptible to catabolite repression (cAMP-level, metabolic state), and influenced by chromosomally encoded repressor molecules - the tetA promoter/operator is tightly controlled and not functionally coupled to any cellular regulation mechanisms or genetic background.

As a consequence, special E. coli strains or extra plasmids are not required and a broad range of culture media and conditions can be used. For example, glucose minimal media and even the XL1-Blue bacterial strain, which carries an episomal copy of the tetracycline resistance gene, can be used for expression. The pASK-IBA expression system is stable under many conditions, including fermentation, and is easy-to-handle.

Further elements of the vectors are a tandem ribosome binding site (RBS) which ensures efficient initiation of translation, the strong terminator of the lipoprotein gene in order to prevent read-through, the intergenic region of the bacteriophage f1 which provides a means for preparing ssDNA and a b-lactamase or chloramphenicol acetyl transferase gene*. The vectors do not mediate resistance against tetracycline.

*Using cloning vectors with b-lactamase resistance gene may be associated with some limitations since ampicillin is degraded quite fast in bacterial culture medium. Therefore, we are now offering our Strep-tag® II vectors pASK-IBA2C to pASK-IBA7C with chloramphenicol resistance instead of ampicillin resistance.

Reference: Skerra, A. (1994). Use of the tetracycline promoter for the tightly regulated production of a murine antibody fragment in Escherichia coli. Gene, 151, 131-135.

The following E. coli strains have already been used successfully for Tet expression with our pASK-IBA vectors:

For secretion, we recommend JM83. For cytoplasmic expression E. coli B strains are recommended, since they lack the lon protease and the ompT outer membrane protease that can degrade proteins during purification (Grodberg and Dunn, 1988, J.Bacteriol. 170, 1245).

Please note that we are not aware of an E. coli strain that is incompatible with the Tet expression system.

The E. coli expression cassette of the Strep-tag®/Strep-Tactin® over-expression system is under transcriptional control of the tetA promoter/operator and repressor. The promoter is induced by a low concentration of anhydrotetracycline (AHT) saving costs and minimizing the antibacterial influence of AHT. Degenkolb et al. (1991) have shown, that AHT binds 35-times tighter than tetracycline to the tet repressor.

Among them, are the type IIS enzymes, like LguI and Esp3I.

Type IIS restriction enzymes are dimeric enzymes that cleave DNA at a defined distance from their non-palindromic, asymmetric recognition site. This means that the target sequence can only be read in one direction. Thereby the digestion with only one single enzyme can generate two different independent sticky ends with 5’-overhangs allowing directional cloning. In addition, after digestion reaction the recognition sequence is removed completely and therefore the encoded amino acid sequence is not affected by remaining restriction enzyme sites.