Please note that our offices will be closed from Dec 24th 2022 until Jan 1st 2023. Last delivery day at Christmas time: Tuesday, December 20th

Show all categories Back

The objective of molecular cloning procedures is to introduce a gene of interest into a suitable expression host in a compatible manner (recombinant DNA) to ultimately produce the gene product (protein) in satisfying quality and quantity.

Cloning means producing identical copies of a certain gene of interest. By cloning, the gene is amplified and then inserted into a plasmid (vector) for the following replication and protein expression. Using plasmids allows for the protection of the foreign genetic material from the expression host’s innate degradation machinery. 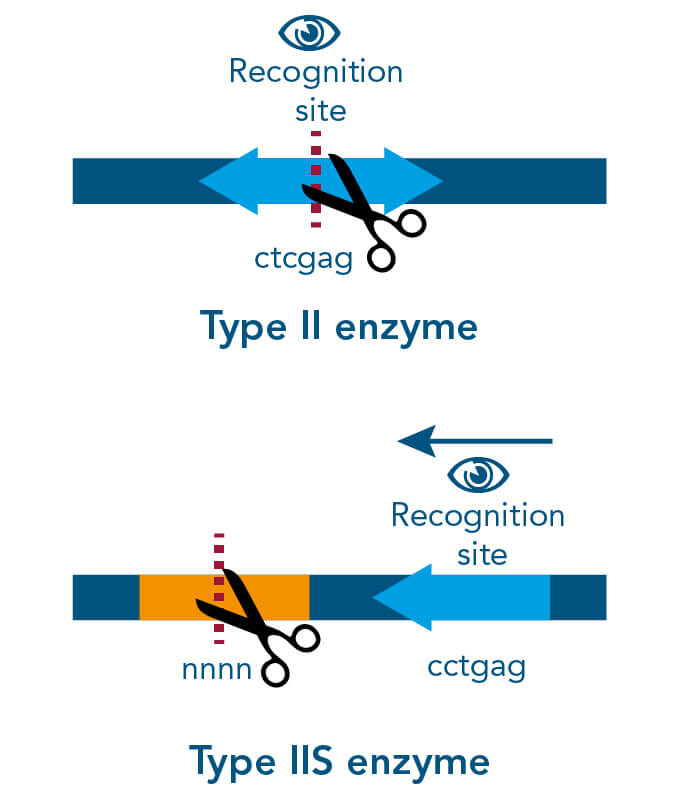 There are different cloning procedures used to insert the gene of interest into a plasmid. Restriction enzyme-based cloning is the standard cloning method in molecular biology. Restriction endonucleases cleave double-stranded DNA (dsDNA) at specific sequence sites called recognition sites. Depending on the employed restriction enzyme, the generated DNA fragments can either have blunt ends or sticky ends. These can be fused with compatible DNA fragments from the plasmid, which is cleaved with the same restriction enzyme, producing the same compatible ends. In the following ligation step, these two fragments can be fused with the aid of the so-called ligase.

A special restriction enzyme-based cloning method makes use of the specific properties of type IIS restriction enzymes, endonucleases that cleave DNA outside of the recognition sequence. In contrast to traditional restriction enzyme cloning, this cutting outside from the recognition site provides the advantage that custom overhangs can be generated.
With the StarGate system, IBA has utilized this approach to create compatible custom overhangs, which can then be fused efficiently. The StarGate system comes along with a large subset of cloning and expression vectors for different expression hosts.

Expression vectors are specially designed to optimally produce the relevant gene product of the inserted foreign DNA in potent host cells of choice. For this purpose, these plasmids are equipped with expression host-dependent genetic sequences, such as particular enhancers and promoters. In case the optimal expression host, purification procedure, and further experimental conditions are already known for a target protein, a ready-to-use single expression vector (Acceptor vector) containing all the required information can be combined with the gene of interest as previously described. However, if the perfect expression and purification strategy for the protein of interest is so far unknown, splitting into a two-vector-system is recommendable. Therefore, IBA offers a Two-step-cloning solution where the vector pENTRY (Donor vector) is utilized to simultaneously introduce the gene of interest into multiple expression vectors (Acceptor vectors) with different genetic backgrounds (e.g. host-specific promoters, signal sequences, and various affinity tags). The resulting diverse Destination vectors can be utilized to screen for the perfect expression host, affinity tag, and other parameters. 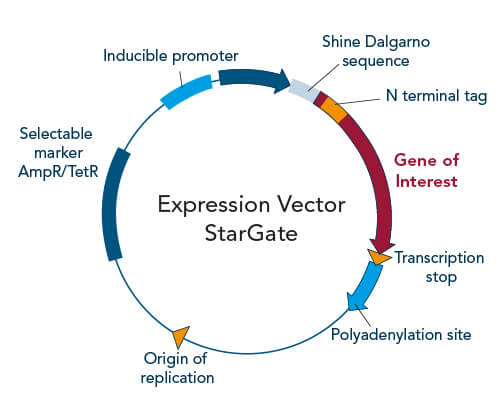 A particular focus should also be set on choosing the appropriate expression host for the protein of interest to ensure getting a biologically functional target. While E. coli are the most prominent host cells due to their easy handling and compatibility with a large portion of targets, eukaryotic cell lines, such as yeasts, insect cells, or mammalian cells are required to obtain complex proteins with proper folding and post-translational modifications. Mammalian cells have become the most popular host for recombinant protein expression, especially of antibodies, therapeutic proteins, or biopharmaceuticals. The Human Embryonic Kidney 293 (HEK) cells are commonly used in drug development and laboratory settings since they exhibit straightforward growth in culture, have a high transfection efficiency, and are amenable to a variety of transfection methods.

IBA’s MEXi-293E cells are such human embryonic kidney (HEK) cells derived from the 293 cell line, which are optimized for the expression of recombinant proteins in mammalian cells and specifically adapted to an efficient growth in the corresponding cell culture media MEXi TM (Transfection Medium) and MEXi CM (Culture Medium).

To allow easy access to the various expression hosts we provide a multitude of plasmids targeting the different hosts, including E. coli and mammalian cells but also yeast and insect cells (Baculovirus vectors).

In the next step, the previously created expression vector carrying the gene of interest needs to be transferred into the chosen expression host for propagation and production of the target protein. This can be realized by various methods, whereof transformation and transfection are the most frequently applied.

Transformation is the process of getting the recombinant vector from a reaction mixture or vector solution into a prokaryotic expression host such as E. coli cells. It is a naturally occurring direct uptake of DNA fragments, which is triggered by different physicochemical stimuli (heat shock, calcium treatment, or electroporation) in the laboratory environment. Once arrived in the cell, the gene on the plasmid can simply be expressed by an appropriate induction method.

In contrast, transfection is a more complicated technique to deliver the recombinant DNA construct into eukaryotic cells, or more precisely into their nucleus. In this method, transient pores have to be opened in the cell membrane (viral packaging with calcium phosphate treatment, electroporation, cationic polyamides, or lipid shuttling) to induce the uptake of the genetic construct into the cytosol, followed by the transport into the nucleus due to signal sequences provided by the vector. Through a repeated process of careful selection and amplification, stable clones with the foreign information integrated into their genome are fabricated.

Notwithstanding the advantage that all descendants of these cells will contain the gene of interest and attend the production of the target, stable transfection is a laborious process mainly recommended for the large-scale production of recombinant proteins. In contrast, to rapidly obtain research quantities of the target, transient expression is the method of choice. This technique results in a quick and short-term production of the recombinant protein for several days after DNA transfection.

IBA’s MEXi mammalian expression system implements this transient approach to enable the simple and efficient episomal replication and expression of the GOI without the need for a prior integration by making use of the EBNA1 protein in combination with oriP-harboring plasmids. Further, the system deploys a polyethylenimine-based transfection, which is an affordable and quick method suitable even for hard-to-transfect cell lines, while simultaneously avoiding cytotoxic effects as in lipid-based techniques, or complicated viral packaging. 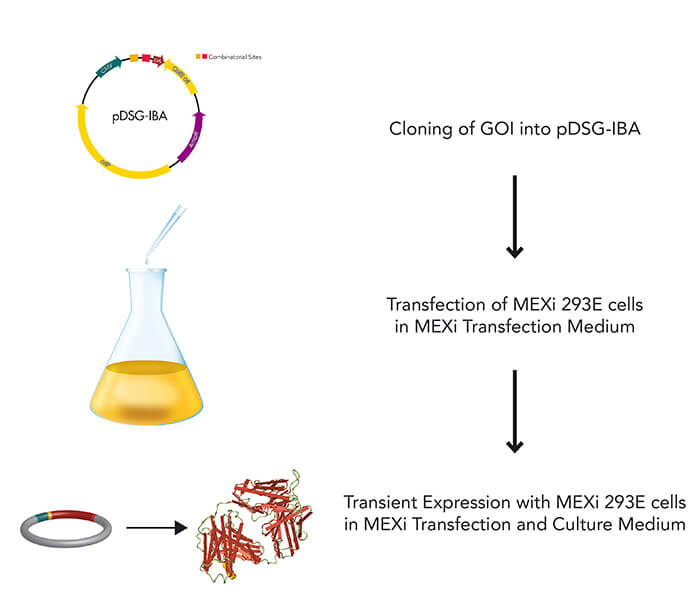